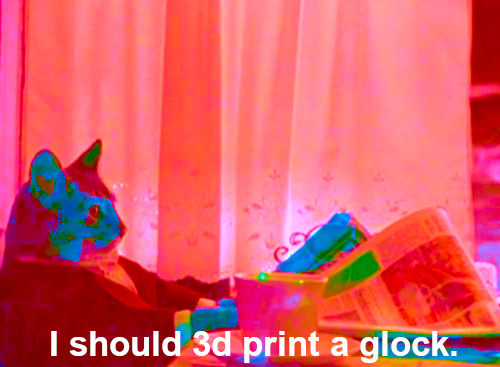 Materials like reinforced nylons are comparatively abrasive vs. filaments like PLA, and will damage most standard brass nozzles. General recommendations for printing with these abrasive filaments include:

For Enders please see the det_disp printing guide. For Prusa the manufacturer recommendations are not remotely sufficient to calibrate the printer. Consider the following in your calibration:

There are many more in-progress projects than listed here - please message me if you think a notable project should be added.

3d gun printing generally
Legality of 3d printed guns and gun-parts varies by jurisdiction. In most/many parts of the USA, 3d printing firearms is for the most part indistinct from completing an 80% serialized firearm part like the p80. Similiar to p80 firearms, there are commonly restrictions on transferring these firearms to others.

automatic fire, suppressors, etc.
Note that while chats in related groups will feature designs or demonstrations involving features like automatic fire, this does not necessarily entail any unlawful activity. Collaborators with appropriate licenses have assisted in such work.

Despite being legal in most parts of the USA, research into 3d gun printing may elicit unwanted scrutiny--particularly in more totalitarian countries. Following are some tools/techniques/thoughts for potentially increasing digital privacy, depending on need for various levels of security/privacy.